(July 1, Purchase, NY) The Performing Arts Center, Purchase College (The PAC) was selected as the location for shooting a portion of PBS’ upcoming A Capitol Fourth celebration concert, which will air on Saturday, July 4. The portion filmed at The PAC will feature a performance by Brian Stokes Mitchell.

The shoot for the event took place in The Performing Arts Center’s Concert Hall on June 22, 2020.

Seth Soloway, Director of The Performing Arts Center, was onsite from the first in to the last out, to oversee social distancing and appropriate COVID-19 precautions were being adhered to. A very small team of The PAC’s skilled full time production crew, led by Director of Production Christy Havard, worked diligently to get the job done just a few hours.

The Performing Arts Center’s Concert Hall was selected thanks to The PAC’s reputation in the field. The PAC has been used a location for a number of film and TV productions throughout the years as part of its thriving rental business, including Mozart in the Jungle, Happy, Law and Order SVU, and the feature film Black Swan. Emmy-award winning lighting designer David Grill (Purchase College ’86; co-director of the Theatre Design/Technology Program at Purchase College) is working on the PBS special and was instrumental in making the connection.

“In these challenging times the thing I’m hearing most from arts colleagues is the struggle to find ways to help people and make a difference under the current circumstances,” comments PAC Director Seth Soloway. “This shoot was an opportunity for Purchase College to put our best foot forward by helping give the world the 4th of July gift that this program will be. It was an honor to do our part, and it felt wonderful to once again be able to pool our collective talents to do so.”

The 40th annual broadcast of A CAPITOL FOURTH airs on PBS Saturday, July 4, 2020 from 8:00 to 9:30 p.m. ET, as well as to our troops serving around the world on the American Forces Network. The program can also be heard in stereo over NPR member stations nationwide.  The concert will also be streaming on Facebook, YouTube and http://www.pbs.org/a-capitol-fourth/home/ and available as Video on Demand for a limited time only, July 4 to July 18, 2020.

Experience something real. The Performing Arts Center, Purchase College (The PAC), a four-theatre complex, is the major professional, non-profit arts presenter in the Southeastern New York–Southwestern Connecticut region. The PAC presents a broad range of performances that inspire, engage, and spark critical conversations, offering classical, contemporary, and world music, dance, theatre, film, comedy, and family programming to audiences from Westchester and the surrounding communities. Public programming is currently on hold due to the COVID-19 pandemic, but The PAC continues to operate virtually through it’s The PAC in YOUR Living Room initiative.

Purchase College, 735 Anderson Hill Road, Purchase, NY, is located 28 miles northeast of New York City at the Connecticut border. The College, part of the State University of New York (SUNY), is an institution of public higher education encompassing the liberal arts and sciences, professional training in the performing and visual arts, continuing education, the Neuberger Museum of Art, and The Performing Arts Center.

About A Capitol Fourth:

On June 22 Capital Concerts announced the 40th anniversary presentation of A CAPITOL FOURTH, the national July 4th TV tradition on PBS. This year’s show is co-hosted by two-time Emmy Award-nominated actor and producer John Stamos (Netflix’s YOU, FULLER HOUSE, ER) and multi-platinum recording artist and star of television, film and the Broadway stage Vanessa Williams. The nation’s 244th birthday celebration will feature new performances from iconic locations across the country, including Washington, D.C, New York, Nashville, Los Angeles and Philadelphia, as well as highlights from the concert’s forty-year history and the stirring patriotic favorites viewers enjoy on the Fourth of July.  Due to the COVID-19 pandemic, the traditional live A CAPITOL FOURTH  will not be held  on the West Lawn of the U.S. Capitol; instead, to ensure the health and safety of all involved, this year’s concert performances were pre-taped without a live audience, as was the case with the recent broadcast of the NATIONAL MEMORIAL DAY CONCERT.

This special 90-minute presentation of A CAPITOL FOURTH, available on television, radio and digital media, will also feature a tribute to our nation’s workers on the front lines in the fight against the pandemic, a segment honoring the contributions of African American heroes from our nation’s past and present, and a salute to our wounded warriors and their families.  The fireworks display over our nation’s iconic skyline will be covered live during the broadcast captured by multiple cameras stationed around the city. 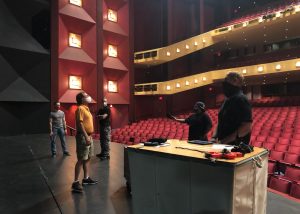