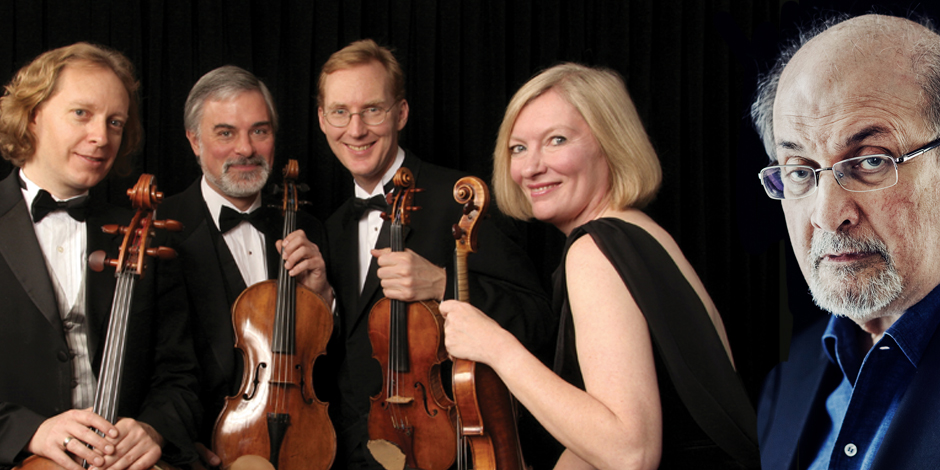 With a well-deserved reputation as one of the most adventurous and fearless string quartets performing today, the American String Quartet, which will celebrate its 45th anniversary in 2019,  has spent decades honing the luxurious sound for which it is famous.

In October, they will come together for a one-of-a-kind collaborative performance. American String Quartet will perform a work by film composer Paul Cantelon built around Salman Rushdie’s novel The Enchantress of Florence, with the author himself reading excerpts from the book between movements. The readings and music will reflect each other’s depth and power, leaving audiences with senses enhanced by both essential languages.

On the program:
CANTELON  Suite on The Enchantress of Florence
SCHUBERT Quartettsatz
SCHUBERT “Death and the Maiden”

Moderated by Gaura Narayan, Associate Professor of Literature in the School of Humanities. In the theatre, immediately after the performance. Free with your ticket.

Gaura Narayan, Associate Professor of Literature in the School of Humanities, received her PhD from Columbia University in 1998. She is the author of Real and Imagined Women in British Romanticism and articles on Salman Rushdie’s Midnight Children, colonial India, Rudyard Kipling’s Kim, Phoolan Devi, and Virginia Woolf’s Orlando. Her current project is on the construction of India in the British imagination during the first phase of imperialism in India (1757-1857).

Get ready by joining us for an informal lecture by Dr. Narayan on Salman Rushdie’s 2008 novel The Enchantress of Florence on Wednesday, October 10 from 12-1:15pm in the Humantities Bldg Room 2052

Donors ($1,000+ level) are welcome to join us for a beverage and bite in the Patron Lounge following the performance and enjoy valet parking at this performance.