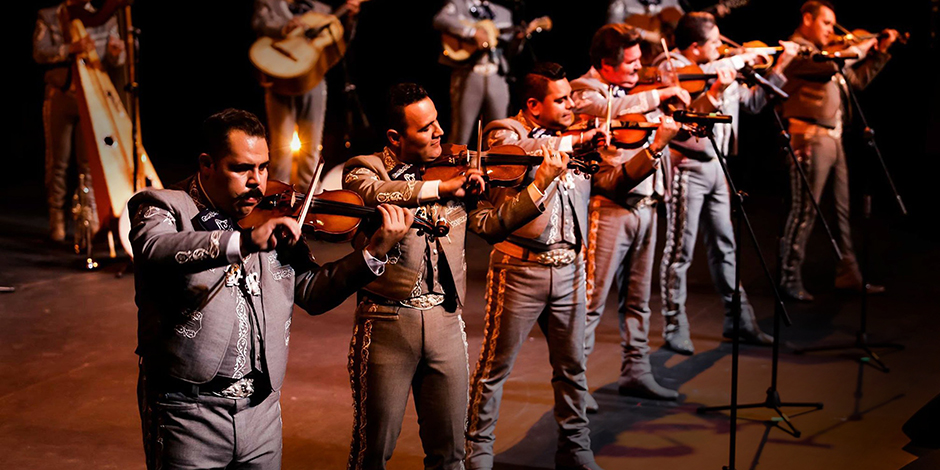 America’s favorite mariachi ensemble Mariachi Los Camperos brings their solid-gold Mexican sound to Purchase for one night only. Acclaimed by audiences at Lincoln Center, The Kennedy Center, The Smithsonian Folklife Festival, and other major venues throughout the U.S., their skillfully arranged versions of classic mariachi melodies and regional styles of traditional music feature full-throated harmonies and unforgettable festive pageantry.

They will be joined on stage by members of our very own Purchase Latin Jazz Orchestra.

We’re thrilled to announce that Lorenzo (Frank) Candelaria, Dean, School of the Arts, Purchase College, SUNY and NYC School Chancellor Richard A. Carranza, both talented mariachi musicians in their own right, will also be joining Mariachi Los Camperos on stage for a few numbers as well as for a talk-back after the show (details below).

Three-time Grammy Award-winner Mariachi Los Camperos was founded in 1961 by Natividad “Nati” Cano, and has played a fundamental role in the development of mariachi music in the United States by mentoring new generations of musicians and expanding audiences. A visionary leader, Cano’s goal was to take mariachi beyond cantinas and onto the stages of the biggest and best concert halls. Today, under the leadership of longtime musical director Jesus “Chuy” Guzman, this groundbreaking mariachi ensemble continues to realize that vision and remains a beacon of artistic excellence and deep community engagement. On January 26, they received the 2020 Grammy for Best Regional Mexican Music Album for their 14-track album titled “De Ayer Para Siempre” (From Yesterday to Forever).

Post-Show
After the performance, please join us in the theatre for a talk-back with Mariachi Los Camperos artists, Lorenzo (Frank) Candelaria, Dean, School of the Arts, Purchase College, SUNY, NYC School Chancellor Richard A. Carranza, and Seth Soloway, Director, The PAC. They’ll discuss the music as well as their shared commitment to public education, humanities- and STEM-driven arts programming, and promoting socio-economic mobility through the arts, especially among first generation and immigrant students. Free with your ticket.