From Director of Production to Interim Managing Director

From Director of Production to Interim Managing Director

Some months ago, The PAC started a project we called “Bringing Backstage Forward.” The idea was to have the production staff create content that would let our audiences get a glimpse of what goes on backstage. Little did I know that the title of our little project was predicting my future…

So, what is it like to go from backstage forward, from behind the curtain to front and center, facing the audience? Well, that is a very good question and one I can now answer pretty easily.

I grew up in a theatre family. If you couldn’t name at least six Shakespeare plays by the time you were in your teens, there was something wrong with you. My favorite was A Midsummer Night’s Dream; I even had a dog named Titania…try calling that out the back door three times! My father is President and Producing Artistic Director of the Walnut Street Theater, my Mum is a Broadway playwright, my sister is an actress and director in NYC, and my brother belongs to the Broadway wardrobe union. And me, well, as you can see, we needed someone to do production – to be the lighting designer, sound designer, to figure out all the technical aspects of theatre. So that’s what I did.

I have spent almost my entire career on the production side of theatre and the entertainment world. But, thanks to my family, I have also had the opportunity and luxury of being able to get to know most other aspects of our industry. From conversations over the dinner table about an agent’s contract or what actors were being considered for what parts, or how important our donors are, I heard it all. At the holidays our house was full of actors, choreographers, designers, you name it, whoever couldn’t make it home for the holidays. Our house was overflowing with show tunes, classical music, industry talk, and ideas about how important the arts are for everyone.

I have always been a sensible, hands-on, get-it-done type of person, which is perfect backstage…but is also quite valuable in the front office, and so I am fortunate to be able to bridge that gap from backstage to front with ease. Taking over this new position of Interim Managing Director seems like a natural progression. Will there be things I need to learn? Sure! But I have a great team here at The PAC, they have great faith in me and I in them, and that is a winning combination. I’m already leading The PAC into new adventures and carrying on past traditions. And you know, one big advantage of me taking this role, is when I see a show or read a technical rider in a contract, I won’t need to ask my Production Manager how much will it cost us, because I already know.

I hope you will join me in supporting The PAC and being a part of our family.
Christy Havard, Interim Managing Director 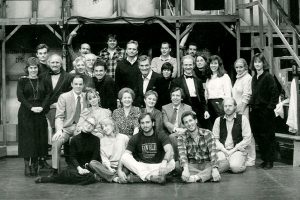 Cast and crew of Noises Off with Christy, her sister Celine, and brother (Julien) at Walnut Street Theater 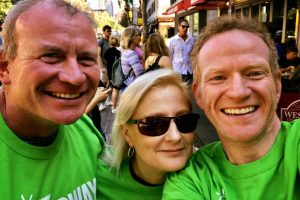 Christy working on a show with Olympia Dukakis 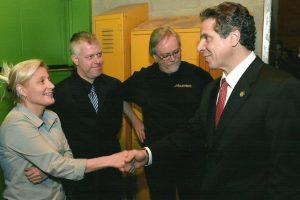 Christy Havard, Pete Specce, and Governor Cuomo at The PAC 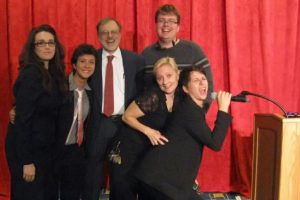 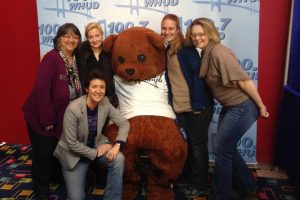 By mara.rupners|Feb 3, 2021|Bringing Backstage Forward, Center News, Meet The PAC Staff|Comments Off on From Director of Production to Interim Managing Director